State Machines in Ruby: An Introduction

A state machine can hold all possible states of something and the allowed transitions between these states. For example, the state machine for a door would have only two states (open and closed) and only two transitions (opening and closing).

On the other hand, complex state machines can have several different states with hundreds of transitions between them. In fact, if you look around, you will notice finite state machines surrounding you - when you buy from a website, get a pack of crisps from the vending machine, or even just withdraw money from an ATM.

When do we need a state machine in development? The simple answer is whenever you want to model multiple rules for state transitions or perform side-effects on some transitions. The key here is to identify parts of your application that would benefit from a state machine. A good example that always works for me is an Order in the context of an e-commerce application.

For a simple application selling products online, an Order can be in one of several states:

You can see the allowed transitions in the following diagram. 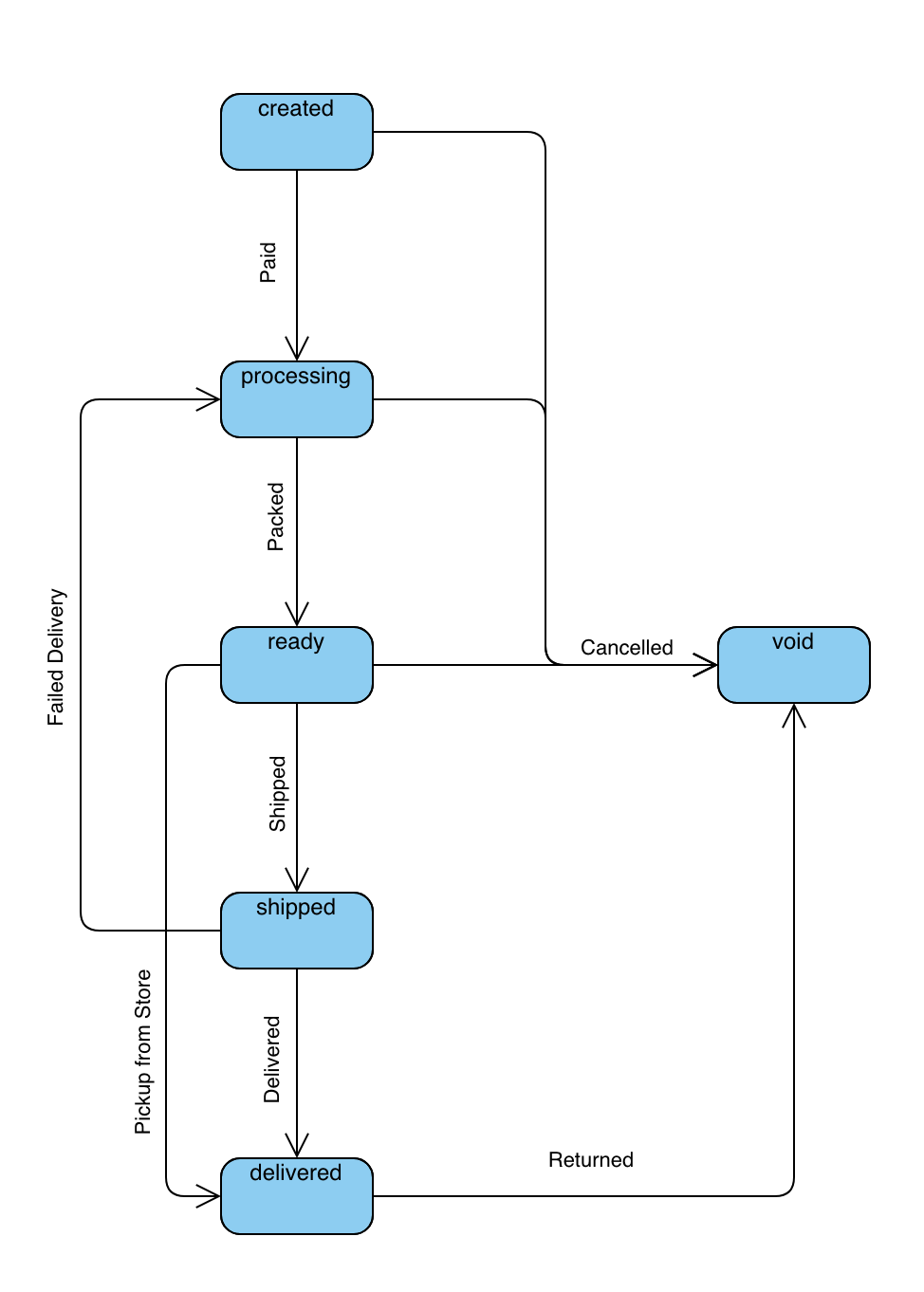 Visualizing the order in the form of a state machine immediately allows us to clearly understand of the full flow, from ordering the product to delivery. And for us developers, it will enable clear, set steps on what can and cannot be done at particular points in that flow.

That being said, it is easy to jump down a rabbit hole by picking this up for a very wide problem and then end up with hundreds of states that are difficult to reason about and follow through. So always have a top-level idea and a state chart for your proposed state machine before implementing it.

Our First State Machine in Ruby

Let’s try to implement our OrderStateMachine with Ruby.

That’s a simple enough implementation. For each possible transition in the state machine, we define a new method that does some sanity checks and performs the transition.

The great thing about the above implementation is that everything is explicit: any new developer can very quickly understand the full extent of the state machine.

Let’s see how we can add some side-effects to the transitions. We’ll automatically ship orders that are packed and deliverable:

While a naïve implementation works great, it is overly verbose, especially when we have a lot of transitions and conditions.

A quick check on Ruby Toolbox brings up several gems for state machines. state_machines and aasm are the most popular ones, and both come with an ActiveRecord adapter if you want to use them with Rails. Both are thoroughly tested and production-ready, so do check them out if you need to implement a state machine.

For this post, I will describe how we can model the state machine for our Order using the state_machines gem.

The above class defines our simple state machine and all of its possible transitions. On top of this, it also automatically exposes a lot of utility methods on an order:

Execute Side-Effects with the State Machines Gem in Ruby

As is usual for any real-world system, many transitions in a state machine will come with some side effects. The state_machines gem makes it easy to define and execute them. Let’s add two side-effects:

We can perform transitions as usual in the order:

I would suggest checking out the Github page for the state_machines gem to learn about all the possible options that the gem offers.

Use the State Machines Gem with ActiveRecord in Ruby on Rails

As discussed before, both state_machines and aasm support ActiveRecord. When you use the state_machines gem with ActiveRecord, not a lot of things change with the implementation. You can continue using most of what we’ve already discussed in the previous sections of this post.

Here are some additional features that you get:

In this post, we explored why we’d use a state machine in development, before building a simple state machine. Finally, we looked at using the state machines gem in Ruby and Ruby on Rails.

Now that you have a basic understanding of a state machine, I am sure you will recognize several scenarios around you that already use a state machine or will benefit greatly from one.

Until next time, I wish you luck building state machines!