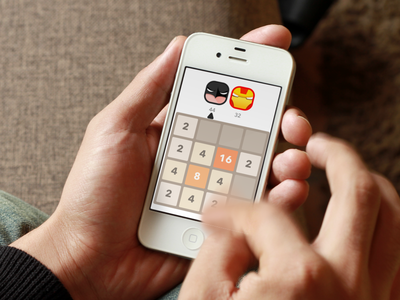 We launched the 2048 Game on iOS in April 2014. I have already written some details about why we did it and the initial launch in a post here. We weren’t looking to build just another clone, there were tons of them already and we were aware of it. We wanted to push out our idea of how it can be tunrned into a multiplayer game. Here are some details about the multiplayer version and how it turned out for us (TLDR: If you just want the gist of it, it didn’t go very well or at least as well as we had planned).

The rules of multiplayer 2048

Two players share the same board and get points only for the tiles that they merge. In every turn, in addition to scoring more points, the player had to think about how to stop the other one from scoring in his next turn. Sort of like chess, sort of like the Letterpress app.

We knew straightaway that we want to use GameCenter, Apple’s social gaming network to build the multiplayer mode. The turn based APIs matched our needs perfectly. Here are the major tasks that a turn based match needs to handle

I wouldn’t bore you with too much technical details in this post. If you are curious, head over to the github and check out the code for our open source version.

So, all done with the turn based stuff and tests, we were heading to launch with great expectations. We thought that even if people have half of our excitement for the multiplayer version, it will still go great. So, we submit the multiplayer version to apple and after a week of wait its finally approved for App Store. We had been playing against each other the whole week waiting to finally get the chance to play against other players when the app launches. I started creating new matches against random guys and I played some intense matches with people I never knew. It was fun!

We try to extract positives from every new idea that we try out. It was fun building multiplayer 2048. It was amazing to see people enjoying the game. But it was heartbreaking to see so few of them! There were a few things that we might have done differently to increase our chances.

Anyway, thanks for reading. It was fun. And if you like what you see, do try out the game here.